As we prepare to down-size,  I have been sorting through the debris of life, making piles to garage sell, to sell-on-line and to sell privately. Luckily, I have a friend helping me who isn't personally attached to my 'treasures'.

Last evening I searched Google to see if I could find out the name of the Ontario folk artist who had carved and painted, with amazing skill, a shore bird that I own.  Searching for 'Canadian folk art birds',  4 images came onto the screen.  One was of my very own carving!  When I clicked on the image, the following article appeared.  This was written in 1977 when my business partner Nora and I had our antique store, The Small Indulgence, on South Granville Street in Vancouver.  I was Jackie Kalman then.

In 1977, folk art had not yet been embraced in Canada and had certainly not been exhibited in our art institutions.

The following article was originally printed in “Antiques and Art” magazine, July / August 1977 issue. It was written by Nora Sterling and Jackie Kalman. This article serves as a useful introduction to folk art, and it is also interesting to note how much folk art has grown in recognition and popularity over the past thirty years.


When the Bowmanville Antiques and Folk Art Show opened its doors this year, waiting with the throng to enter were two people very significant by their presence. They were buyers from the Museum of Man and the National Gallery in Ottawa. The academically oriented National Gallery soon will be opening its folk art room and, in anticipation, has been collecting for the past few years.

By buying and displaying folk art, these prestigious institutions announce to Canadians what other more culturally secure countries have acknowledged for at least 50 years: folk art has finally come of age.

In the United States, as early as the 1920s, families like the Rockefellers, DuPonts and Whitneys had major collections of folk art, much of which now reside in three New York museums: the Metropolitan, the Whitney and the Museum of Modern Art.

In Canada, folk art is just being recognised as a viable and valid art form with qualities of freshness, inventiveness and vigour that make it exciting. What gives folk art its originality and charm is that, fortunately, the gifted artists who produced it are free from the dogmas and restrictions which the academic world imposes.

Folk art is not merely a quaint reminder of a nation's manners and mores, a thing of the past with only functional or merely decorative purposes. It may indeed have all of these attributes, but like all good art, its expressions are powerful and compelling with an originality of concept, creativity of design, craftsmanly use of the medium and flashes of inspiration that are not surpassed by many academic artists.

Keeping in mind the similarities between academic and folk artists, the distinctive difference is that the latter is unschooled, while not necessarily unskilled. For example, a folk artist may have been whittling from his youth, creating bits and pieces for his own pleasure in his spare time. As an adult he may have become a white collar worker or perhaps a farmer, while still retaining his interest and further developing his skill.

Donald Hays is such a folk artist. Carving since he was five years old, he is .now in his early 40s and an engineer by profession. He carves bird decoys which he paints with the incredible expertise and attention to detail of an Audubon. With the true artist's eye, he chooses those idiosyncratic stances and important characteristics that are peculiar to the bird he is carving. 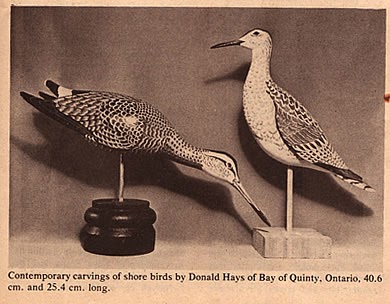 On the other hand, Collins Eisenhauer, a folk artist who, like Grandma Moses, has "made it," did not start intensive wood carving until 1964, when he was 66 years old. When asked what he did for a living in the '30s, Eisenhauer replied, " I wouldn't like to tell you! " He does admit, however, to being a farm hand, a logger and a sailor. His work has been bought by the Museum of Man, the Art Gallery of Nova Scotia and the National Gallery in Ottawa.

Though carved from big hunks of wood, his figures still have a two dimensional look about them. They have the static and stiff quality which is characteristic of naive art - as if the artist does not want to risk a trial of skill to depict movement. 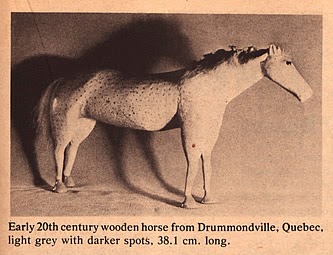 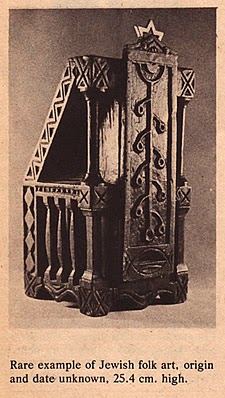 Charles Tanner, an ex-fisherman from Nova Scotia, approaches the task of carving with even a lesser degree of academic knowledge of the craft of sculpture than Eisenhauer. He solves his technical problems simply, by a complete disregard of detail and a disrespect for proportion which, in effect, enhance his work. One is struck by his bold personal style - exuberant, colourful and direct. His sculptures are now on tour with an exhibit of Canadian art assembled by the Art Gallery of Nova Scotia. 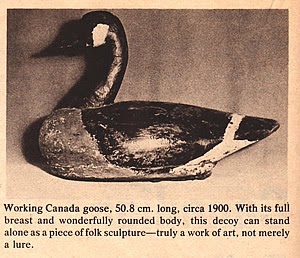 Generally studied in a category unto themselves, decoys have a significant place in the spectrum of folk art. Following the Indian custom of making lures to attract water fowl, the white man began carving and painting decoys.

These decoys were utilitarian. They were meant, through their likenesses, to attract birds to be shot. The early makers sold their decoys for 20 cents to 50 cents a piece. However, when market gunning was prohibited in 1918, decoy makers and factories went out of business, so the sportsman, by default, became his own decoy maker.

At this juncture, decoys became folk sculpture. The link with the folk genre lies in the carver's craftsmanship and especially in his personal interpretation of the salient characteristics of his quarry.

Sculpture is only one way in which the power and beauty of folk art is expressed. Rugs, quilts, paintings, furniture and accessories are among the wide variety of objects produced by folk artists.

Much has been written on folk art, albeit not Canadian. Many art historians, curators and artists have concluded that the expressions of folk art are world-wide and that they state universal truths - realities which will always be voiced by untrained people with a creative urge. 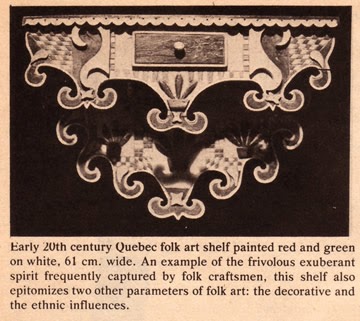 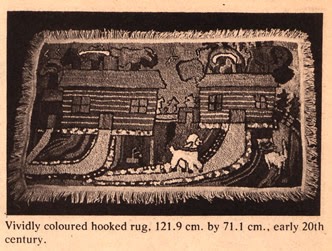 Posted by fromtheothersideofseventy at 17:13 2 comments:

I apologize if you have received this a second time; I'm still trying to figure this blogspot.ca out.


Please pardon this new revised edition of Dayenu improvised from the Passover Haggadah.  The original song thanks God for all the good He did for us. If you're not familiar with the tune, you can listen on youtube. 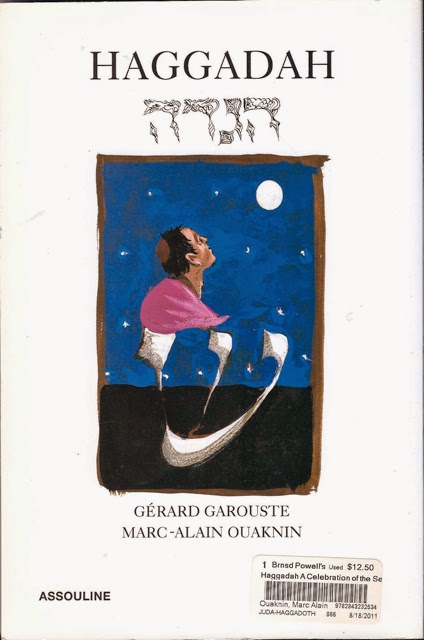 My rendition is more of a lament.


Had Brian had hernia surgery
And not gone by ambulance
It would have been enough! (dayenu)

Had I had cataract surgery
And not macular edema
It would have been enough! (dayenu)

Had I had shingles
And not delayed my surgery
It would have been enough! (dayenu)

Had I restricted my diet
And not removed matzo
It would have been enough! (dayenu)

Had I been recovering
And not gotten FLEA BITES
It would have been enough! (dayenu)

The beautiful Abkhazi Gardens were open today from 11-4 and Brian and I were there before noon to revel in their beauty.  The strange term 'subtle magnificence' comes to mind. 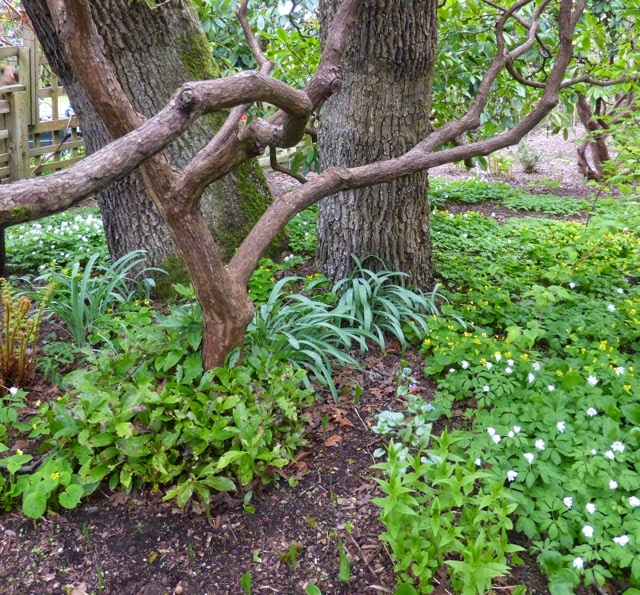 The glaciated rocky slopes, combined with native Gary oaks and an abundance of flowering native plants, are remarkable.  As well, there are mature conifers and Japanese maples adding subtle variations of tone and texture.  The Princess and Prince Abkhazi worked in harmony with the landscape, and this, I believe,  is what sets it apart from other garden designs: it is truly a garden of the West Coast. 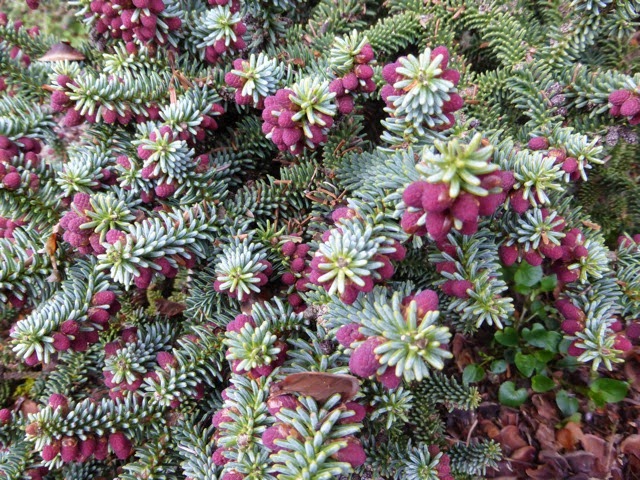 The 50 year old rhododendrons were in bloom, with flowers ranging from the palest pink to deep crimson.  There were yellows too, teasing my eye to travel through the dense, rich foliage and then upwards as the plants seemed to stretch towards cloud and grey sky.

It is only here and at U.Vic's Finnerty garden that I truly believe in the splendor of this species. 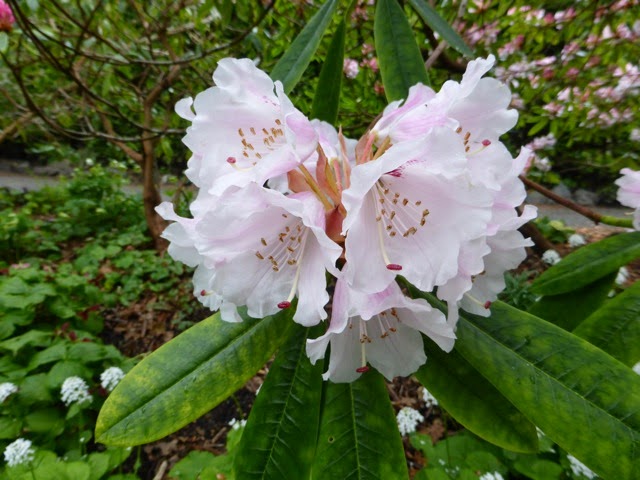 Meeting up with our friend Penny and her gardening cohort, Bonnie, made the visit even more fun.  (look for Penny's photo cards in the Garden's gift shop)

Posted by fromtheothersideofseventy at 16:23 No comments:

Truly, we live with mysteries too marvelous
to be understood.

How grass can be nourishing in the
mouths of the lambs.
How rivers and stones are forever
in allegiance with gravity
while we ourselves dream of rising.
How two hands touch and the bonds
will never be broken.
How people come, from delight or the
scars of damage,
to the comfort of a poem.

Let me keep my distance, always, from those
who think they have the answers.

Let me keep company always with those who say
"Look!" and laugh in astonishment,
and bow their heads.
Posted by fromtheothersideofseventy at 12:10 4 comments: