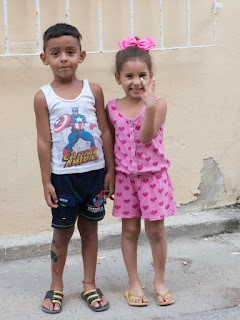 Accompanied by Sheila's two Corgis, we began our walk at 9 a.m., avoiding the forecasted heat of the day.  Just as we were settling into a comfortable pace, Sheila suddenly asked me if I considered myself old.  Gulp.  Where did that come from?  In the quiet few moments following this question, my way younger friend added...."Because I don't consider you old."

The timing of her query was interesting.  Just two evenings ago, Brian and I had been with a group of friends, all of whom were at least 10 years younger than ourselves, and a couple were almost 15 years my junior. They were sharing their birthday information -- day, month and year of their birth-- in a kind of parlour game, based on the fascinating book, The Life You Were Born to Live by Dan Milman.

When the conversation shifted, I mentioned that my first teaching job in 1964 had been in Princeton, New Jersey.  Not missing a beat, Bill wondered if Einstein had been there at this same time. Consulting his iPhone, he discovered that, in fact, he had died nearly a full decade before, at the age of 76. 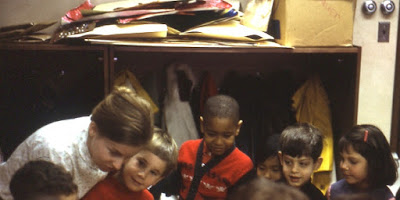 Perhaps it was only me who felt I was being associated with an earlier time, as an adult during their childhoods.

Continuing to consider Sheila's query, I noticed how pleased I was at a party last evening. A woman, many years younger than me, thought we were the same age.  And, earlier this year, when my daughter told me that a friend of hers thought I was very youthful, I quietly cheered.

As I write this, I wonder if  I want to simply appear younger or actually be young.

I wonder if I am perhaps expressing a sort of ageism, in seeming to discount my true numbers.

No, I realize that this isn't what I'm doing: I can appear "youthful" in mind and body and still be my 74-year-old self.

"Writing motivates you to look closely at life
as it lurches by and tramps around."    Anne Lamott

Ursula Le Guin writes in No Time to Spare, "I've lost faith in the saying, 'You're only as old as you think you are,' ever since I got old." She continues, "It is a saying with a fine heritage.  It goes right back to the idea of The Power of Positive Thinking, which is so strong in America because it so fits with the Power of Commercial Advertising and with the Power of Wishful Thinking, aka the American Dream."  She goes on to say, "If I'm ninety and believe I'm forty-five, I'm headed for a very bad time trying to get out of the bathtub.....Even if I'm seventy and think I'm forty, I'm fooling myself to the extent of almost certainly acting like an awful fool." 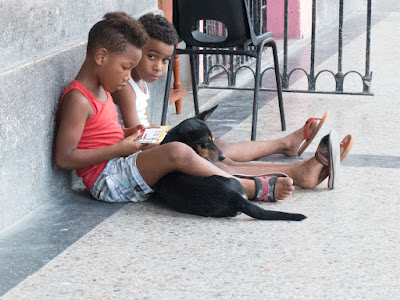 A woman I talked with last evening, who seemed to be my age, had her short hair in a rainbow of colours. She told me her regime. One day a walk, the next Zumba, the following a spin class...I cut her off before she could tell me about the other four days. She said that she and her friends had walked to Nanaimo last year, a five-day jaunt. What!?@#%  Just when I was feeling proud that I had a walk planned for the following day! 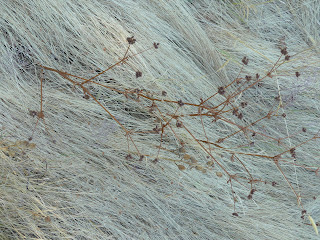 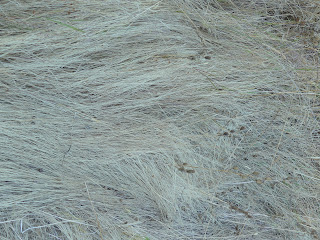 I reminded myself that a few days earlier, I had struggled to remove some very root-bound horsetails from a long tin planter. With a knife, I cut the mass into the three separate plants and, up to my elbows, struggled to lift the sections one by one.  It was difficult work. Taking a needed break after extracting one plant, I muttered "What in hell am I attempting to do at my age?!" I must have spoken it aloud, because my neighbour responded, from her side of the fence, that I was able to do it at my age simply because I was continuing to do it.

I guess so.  It sure beats walking to Nanaimo. 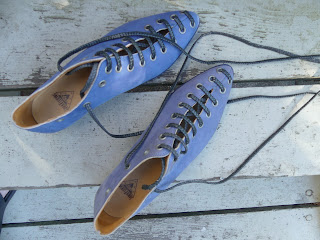 Responding to Sheila's question, I told her I feel my age number when I imagine that I possibly won't be alive to see my beautiful grandkids fully grown up. The age I am tells me to return to Cuba this year and not to wait. To tell the people I cherish that I love them. To eat that piece of almond shortcake from Tonelli's Deli.

I feel my age number and a pain in my heart whenever I reread this quote from Like Normal People (Karen Bender),  “Ella looked out the window and tried to imagine a future without herself.  The world would not need her any more than it had needed her before she was born." 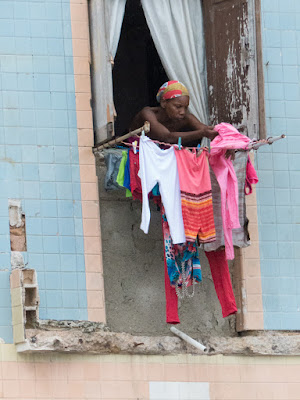 I've already outlived my mother, who died before her 70th birthday.  My father lived to be 79. Their lives were shortened considerably as they were both heavy smokers, and this greatly compromised their health. 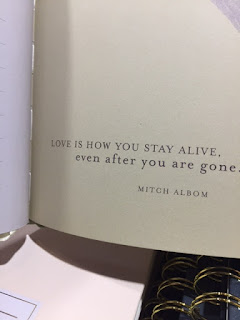 When our walk was over and we were making tentative plans for our next excursion,  I said to Sheila,  "No, I don't consider myself old." 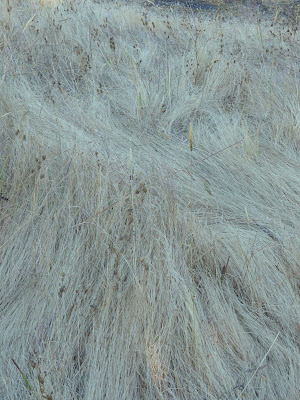 Posted by fromtheothersideofseventy at 13:09 3 comments:

expectations: notes to myself

I'm moving though a very painful week. A week when people I had considered friends threw me under the bus.  Or that's how it seems to me. And how it seems to dear friends who have comforted me.

The particular incident isn't important to write about, nor is the bruised part of me necessary to lay out for examination. What is important is to notice once again, how defeating it is to have specific expectations of people. To believe that they will act as I would have acted in the same situation. 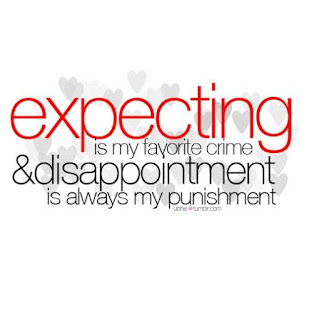 I fall for this all the time!

Sometimes it is a small matter, other times it's big.

I did a Google search for "expectations" and immediately got a few million hits.

One of my favourites is a quote from Louise Beal who says, "Love thy neighbor as yourself, but choose your neighborhood."  William Shakespeare follows with "Expectation is the root of all heartache."

And finally, the one that seems to resonate most today, "One of the hardest things you will ever have to do, my dear, is to grieve the loss of a person who is still alive." (My father's advice #1)

Brian claims my pain is consistent with my present astrology transit: Saturn, the ruler of the universe, is square to my Aries moon.  This is a challenging time for me emotionally, akin to a teacher striking my knuckles with a ruler. Difficult transits are never brief, it appears-- this will hang around until December, so Brian says! 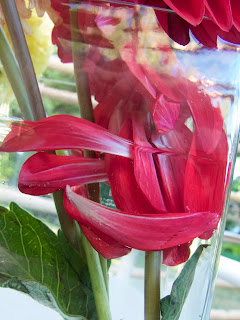 An antidote to my pain arrived at 10 a.m. this morning.  My friend, Joanna, came over for coffee and a spin through hundreds of my Cuba photographs stored on my computer.  We love the same clotheslines, broken chairs and wonderful abstractions of colour on plastered walls.  A photographic soulmate!


So, partly to push my hurt away, I started going through words and phrases that I have gathered over several years. Cut-outs from magazines relating to art and life's journey and sometimes spiced with a healthy dose of humour. 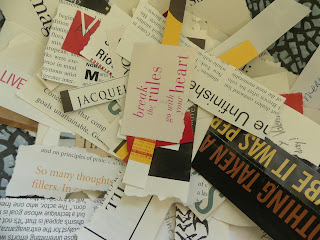 These paper scraps don't give credit to the original writer, they are simply borrowed words. Moving some paper bits around, messages appear, and, this afternoon, they seem to both calm me and make me smile.

While I love "a smoky and uproarious arena for self-criticism" and "Baby powder, dead fish, wax, and car engines", the word pictures following are my choices today. 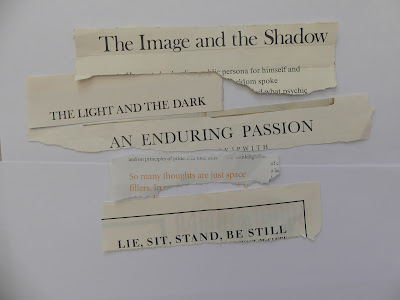 The small clipping with orange letters above says, "So many thoughts are just space fillers." 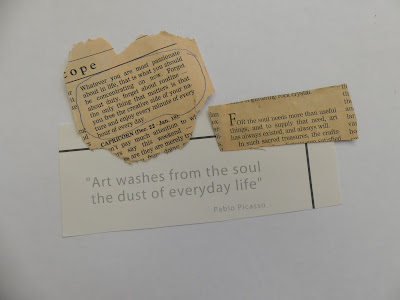 Since the clipping are difficult to read, I'll transcribe them
and/or click on any image to enlarge.

The larger newspaper clipping above says: "Whatever you are most passionate about in life, that is what you should be concentrating on now. Forget duty, forget about routine- the only thing that matters is that you free the creative side of your nature and enjoy every minute of every hour of every day."

The smaller clipping supports that. "For the soul needs more than useful things, and to supply that need, art has always existed and always will."

And finally Picasso says, "Art washes from every soul the dust of everyday life." 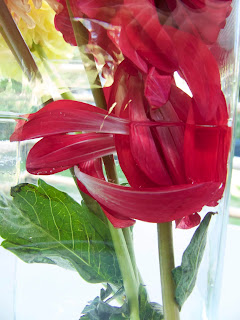 The paper bit I chose last is a reminder.

"People need someplace to go, something to do and someone to love."

Posted by fromtheothersideofseventy at 22:01 2 comments: