the printer and me

I started writing this entry several days ago when I found myself at a walk-in clinic without a book.  The receptionist kindly gave me a sheet of paper and a clip board. 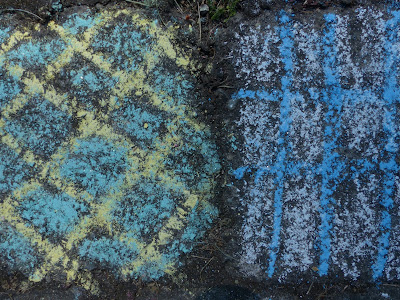 I began: this has been a humbling four weeks. Having taken thousands of photographs since buying my camera in the new year, I have a large selection from which to choose; hundreds that I had considered material to print, and to print large.  Well, the lesson began on our first printing day.

A poppy head that Patrice and I had considered outstanding, was far less so when printed.  Small sunbursts, hardly a distraction when viewed on the computer screen, became irritatingly obvious on the 81/2 x 11 print. 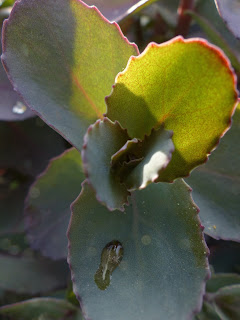 Later that day, I looked through the innumerable sedums I had photographed in our front garden.

A great many of them had droplets of water resting on their succulent 'leaves', as the result of our sprinkler system.  In shades of purple, ranging from red purple to a colour closer to blue, and areas that seemed translucent in shades of yellow, many of these  photographs still held me captive. The shapes of the droplets, often appearing suspended, were beautiful as well. 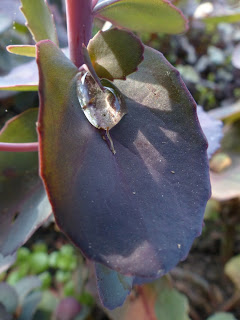 click on any picture to see a larger image 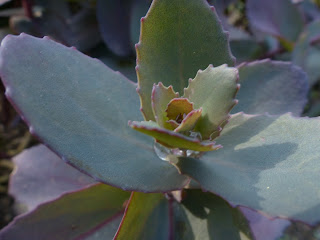 An emotional joy to view on the screen, I concluded, though not the perfect collection to print.
(see the entry of May 23 to see more sedum photographs)
Two down.

Feeling discouraged, I transported myself back in time to the early mornings and to the evenings at dusk when I had immersed myself in the gardens, looking through my camera's macro lens.  In that moment of recollection, the peace, the joy and the sense of wonder returned.  It wasn't about the particular photographs I had captured, the so-called gems, it was rather the meditative calmness I had felt while in the garden that was the gem, my authentic self revealed.

At the time of this doctor's office draft, Patrice and I had had three additional printing sessions.  I noticed that I had discounted most of my 'flower' photographs as being too calendar-greeting-card-like, and that I was searching for images that reflected my artist's eye. Perhaps a different way of seeing, or an image that might tell a story. Photographs that reveal something hidden or that evoke an emotional response. 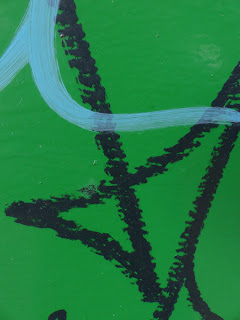 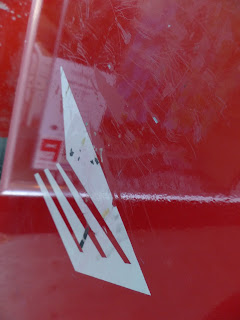 I realized that I had, until then, been choosing 'safe', thinking finished product, thinking  paper costs. 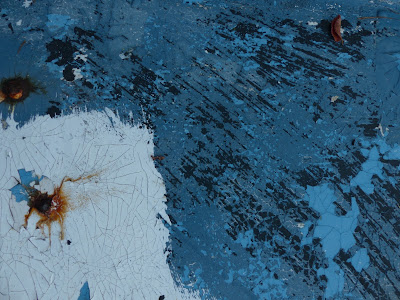 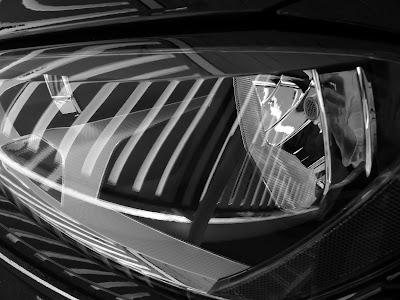 This past Friday I chose fun.  I chose delight.  I chose abstract. I went and bought 50 more sheets of photographic paper and said to hell with ink costs. 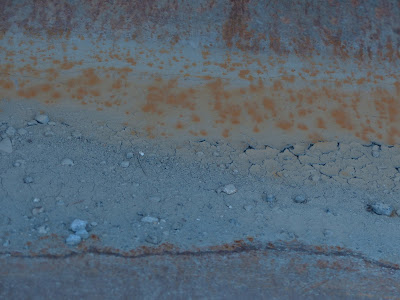 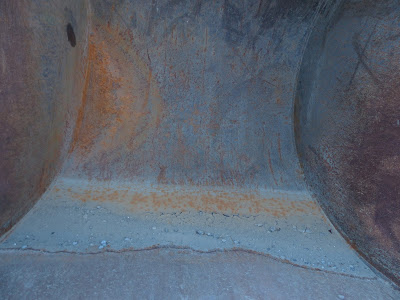 And, I am delighted with five new prints!

(none are shown on this blog entry)

Posted by fromtheothersideofseventy at 19:31 3 comments: